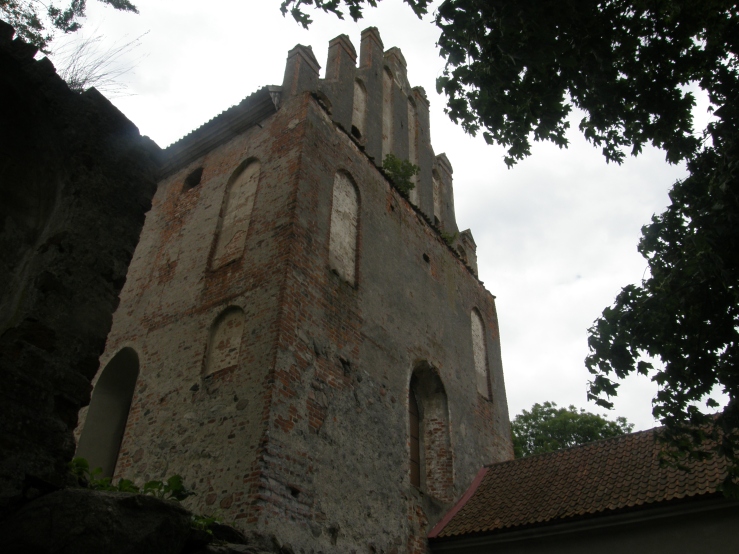 Last summer I had a rare chance to join all of my areas of interest at one time and at one place. During a cycling trip (bikes!) I found by chance a medieval castle (history!) and took some nice pictures (photography!). But let’s start from the beginning. 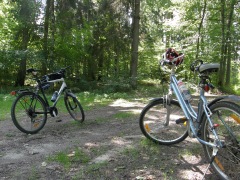 I can describe myself as seasonal but rather passionate biker. Every year, starting from April and until early September, at least once a week I get on my one and only Giant and take a 50-60 kilometers tour. I should say we do it, because I always go for such trips with my dearest Wife, who is also a devoted cyclist. Our routes usually cover the area within or right outside of Warsaw. It means that we travel across  rather flat terrains and taking even 80 kilometers long trip is not a big challenge, at least not for us. We experience the real cycling challenge once a year during our seasonal visit to Mazury region at the beginning of August.

There are no mountains there but it’s an area shaped mostly by glaciers which results with large number of lakes surrounded by numerous hillocks up to 200 meters above sea level. So riding a bicycle there is a continuous series of slow climbs followed by speedy downhill rides. After 10 or more kilometers of that you pray to see a piece of flat plain ahead of you after the next turn. We usually spend 10-11 days there based in Mrągowo, taking 4 or 5 cycling excursions up to 70 kilometers each. We set an interesting goal to reach and plan the route carefully so that to avoid cycling the main, highly frequented roads. Of course it makes our excursions longer but at least we don’t need to worry about our lives all the time and the chances to spot interesting places are increased.

The previous year during one of these expeditions we once again saw that using sometimes more challenging back roads was a good choice. After covering of about half of planned route and leaving behind a few kilometers of constant ups and downs, before us we saw a long expected plain area that could give us some rest. As we were approaching a tiny village called Bezławki, first thing to notice was the enormously big building that seemed to ba a church situated on the top of a small hillock. We could see it from a distance of 2-3 kilometers and looking at it we had a feeling that there was something strange about this object. When we reached the village we decided to climb up the hill and take a closer look.

The building appeared to be a church indeed, with a tall bell tower and a small desolate churchyard. But usually the churches aren’t surrounded by a stone walls, and that one was. I was aware that many medieval temples served also as  shelters for the refugees in case of

enemy’s invasion, but it didn’t seem to be a case here. Moreover, the bell tower much differed from the main part of the building, which also had unusual set of windows of different size, most of them walled with bricks. Our general conclusion was that it must have been something else before becoming a church. These guesses soon proved to be correct.

Lucky for us there was an information board standing near the building, that provided us with basic historical facts about the place. It had been put there few years before, after the thorough archaeological search had been made there. So we learned that we were looking at the castle built by Teutonic Knights at the beginning of 15th century. What presently constituted the main part of the temple had used to be a residence and a shelter for castle’s crew. The now walled, narrow windows had served as shooting stands for the

defenders during enemy’s siege. The stronghold had been protected by a much taller brick wall then and what we saw was only the remaining basic layer. About a hundred years after the castle had been built it was no longer needed for military purposes and was turned into a church with the bell tower added in 18th century.

Apart from these historical facts, there’s also a legend related to that place, as every castle should have one. It is said that shortly after the fortress had been built the Holy Grail (a chalice) was brought there by a Lithuanian prince allied to Teutonic Knights. How he had taken possession of this valuable item is another story, but the legend says he offered it as a gift to the castle’s chapel. The chalice remained there until in 1520 it was hidden in one of the church’s walls to protect it from being stolen and profaned by the army plundering the surroundings at that time. It still must be somewhere there waiting to be discovered…

After spending some time admiring the castle and the splendid view from the top of the hill, we moved away to reach our destination. Although the small castle we spotted can in no way be compared to those medieval constructions you can find in France or Germany, we had a feeling that we had visited a unique place. Belive me, finding such old, mysterious and beautifully located object in the area where you’d never expect it to find, tastes like a true discovery.

13 thoughts on “And so I stumbled on a castle…”

What do you think? Cancel reply